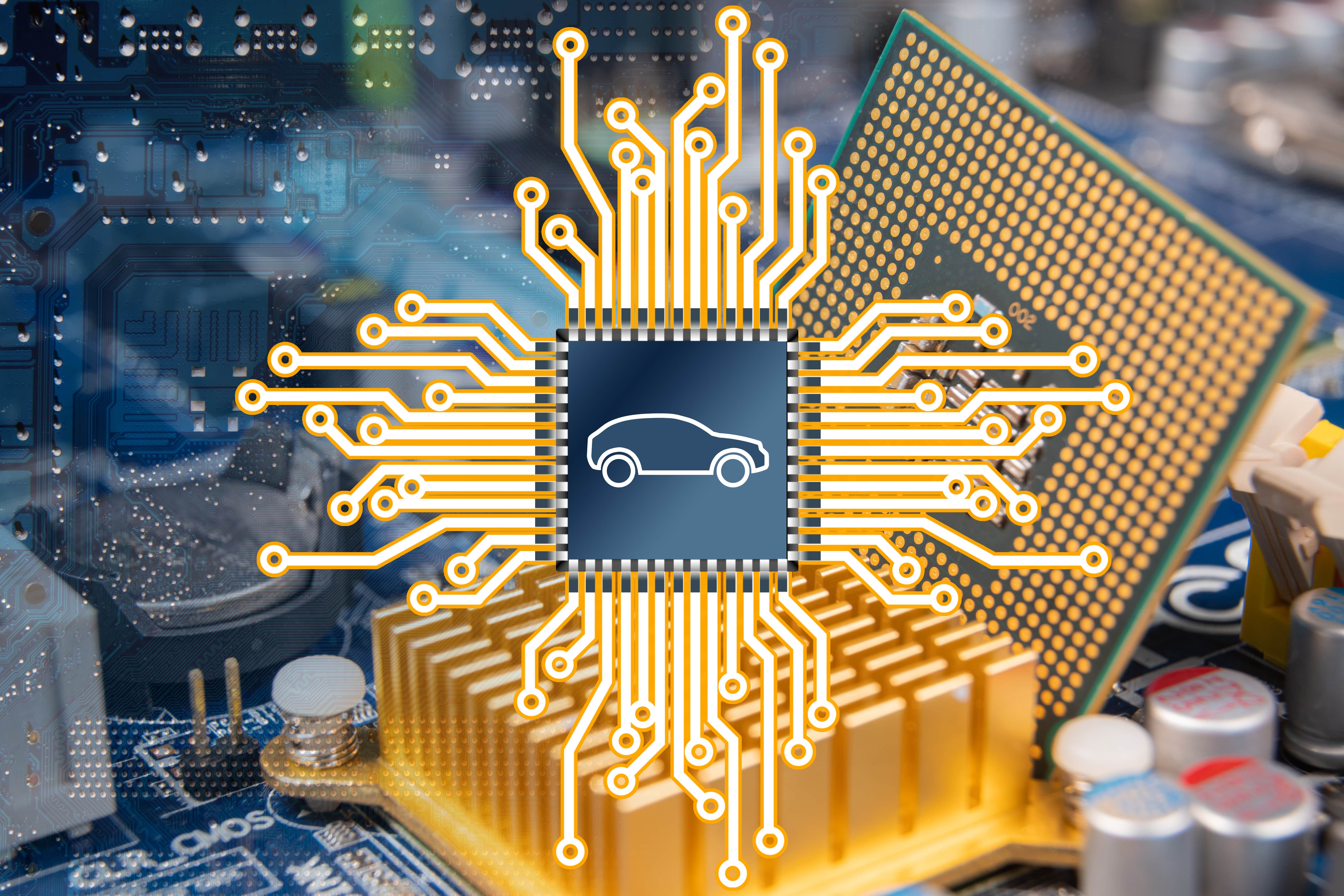 The chips--semiconductor chips, that is--are down for the automotive industry. What’s causing the global chip shortage, and what are governments doing about it?

Just as it is bouncing back from its 2020 pandemic slump, the automotive industry faces a new obstacle on the road to recovery: the semiconductor chip shortage. It has forced automakers to halt production in factories, from Daimler in Germany to General Motors in the United States. The shortage is predicted to cut USD 60.6 billion in revenue from the global automotive industry this 2021.

In this article, we take a look at how something so small can have a huge ripple effect on the car-making industry. We shed some light on how--and where--semiconductor chips are manufactured, and why they are vital to the automotive industry’s digital transformation.

Manufacturing a chip can take up to 26 weeks and involves giant factories with multi-million-dollar equipment and facilities that are cleaner than hospital operating rooms.

Production of a chip starts with sand that is purified and melted into solid cylinders called ingots. These ingots are sliced into ultra-thin discs, called semiconductor wafers. These blank wafers are printed with intricate circuit patterns that will later become individual chips. Depending on the complexity, manufacturing these semiconductor wafers alone can take up to 1,400 process steps.

From our phones to our laptops, transportation to healthcare, semiconductors power our modern world. And yet, only a handful of foundries in a few countries dominate global manufacturing capacity.

The age of the high-tech vehicle

Semiconductors have become key components in cars, enabling technologies related to connectivity, infotainment, and safety. A vehicle from a premium brand can require more than 3,000 chips--all of which are needed to complete the production of a vehicle.

"Modern cars are becoming computers on wheels, with an abundance of silicon required to control everything from the infotainment system to camera, radar and lidar," CCS Insight analyst Geoff Blaber told the BBC.

Automobiles are becoming more dependent on chips, but the industry only spends around USD 40 billion a year on chips--around 10% of the global market. In comparison, smartphone manufacturers account for 28% of global chip spending, while PCs account for 32%.

In 2019, 93 million vehicles rolled off assembly lines, while 1.4 billion units of smartphones were manufactured. Given these numbers, it’s understandable that a semiconductor company would prioritize consumer electronics manufacturers, as they are more lucrative customers.

On top of the pandemic disrupting global supply chains, extreme weather conditions have also contributed to the chip shortage.

Taiwan Semiconductor Manufacturing Co Ltd (TSMC), the world’s largest contract chipmaker, uses more than 150,000 tons of water per day. The country is now facing its worst drought in 56 years, which could affect its operations. In Texas, three chip companies shut down their operations for weeks because of severe winter weather.

Last March 19, a fire broke out in a Renesas Electronics factory in Japan. Renesas, a key supplier of automotive semiconductors, said full-production capacity would be restored by mid-June.

These disruptions have left automakers scrambling. Some companies have begun to triage their inventory of chips. “We’re trying to find an intelligent way to prioritize cars with the higher margins,” Clotilde Delbos, Renault’s deputy chief executive, told analysts on Thursday.

French automaker Peugeot announced that it would replace digital speedometers with analog ones in its Peugeot 308 vehicles, allocating its chip supply for digital dashboards on its most popular models.

As the industry continues its shift toward smart mobility such as autonomous vehicles (AVs) and electric vehicles (EVs), the importance of electronic components will continue to increase.

The race for technological sovereignty

What steps are governments taking to make their countries less vulnerable to disruptions in tech supply chains?

In Japan, three of the country’s leading suppliers in the semiconductor industry are joining a government-funded USD 385-million program to develop advanced chipmaking production technology. Supported by the Ministry of Economy, Trade, and Industry (METI), the project seeks to “establish next-generation production technology in the 2-nanometer process and beyond by the mid-2020s.”

To protect and further expand the country’s position, South Korea recently announced new government policies, which include tax credits of up to 50% for research and development and 44% for manufacturing.

The European Union (EU), unveiled its “2030 Digital Compass” plan, which aims to double the EU’s share of global chip production to 20% by 2030.

In response to US sanctions, a top priority in China’s latest Five-Year Plan is to strengthen China’s technological independence in semiconductor production.  At present, the country imports around 90% of semiconductors, but it aims to reverse that with 70% of chip supplies to be manufactured locally by 2025.

Last February, U.S. President Joe Biden signed an executive order which calls for a 100-day review of vulnerabilities and areas for improvement of supply chains in rare earth minerals, high-capacity batteries, pharmaceuticals, and semiconductor chips. The President also is calling on Congress to invest USD 50 billion in semiconductor manufacturing and research, as called for in the Creating Helpful Incentives to Produce Semiconductors for America Act (CHIPS for America Act).

The pandemic has underscored the importance of digital technology. To maintain and enhance our digital way of life, governments need to go all in and not just let the chips fall where they may.