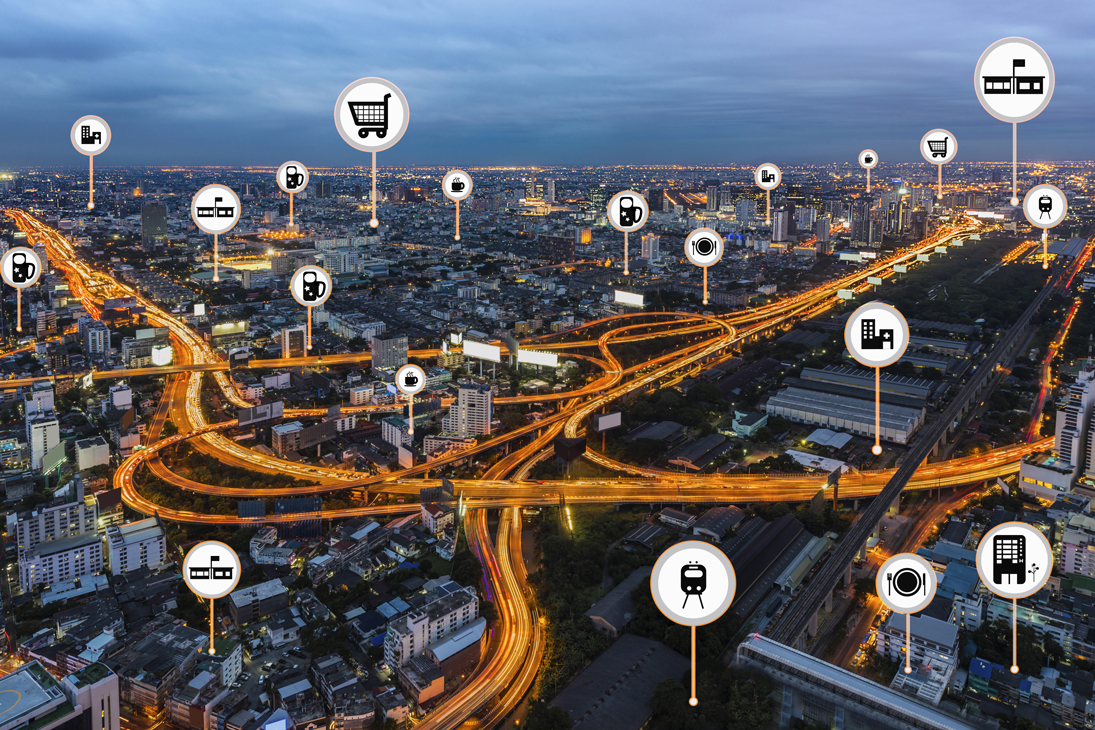 With more than half of the world’s population living in urban areas, smart cities can utilize technology and data to make cities cleaner, greener, and more efficient.

Using data from sensors and cameras, South Korea’s Smart City Data Hub System enabled the containment of COVID-19 without lockdown measures. In Dubai, an AI surveillance system was used to identify citizens disobeying lockdown. In Boston, disinfectant robots cleaned the city’s food bank, allowing the organization to continue serving those in need during the pandemic.

It wasn’t just technology itself doing the work, but technology connecting—and empowering—humanity.

Localized neighborhood apps informing residents about garbage collection schedules and enabled them to help neighbors soared in popularity. Professor Richard Sennett, an urban planner who helped redesign New York City in the 1980s, calls it a new era of “neighbors responsible to strangers”.

The idea of smart cities is not new. But when the pandemic knocked everyone out of their comfort zone, it became clear that smart cities could be the best way for communities around the world to overcome this global crisis—and be better prepared for future ones.

In this article, we explore the potential of smart cities: what they are, how they can make cities more resilient and sustainable—and what we can all do to transform that promise into a reality.

What are smart cities?
CB Insights defines a smart city as one that “can collect and analyze mass quantities of data from a wide variety of industries, from urban planning to garbage collection. In a smart city, a complex network of interconnected sensors, devices, and software must be built and maintained. This should allow the city to become a more sustainable and efficient environment for its residents.”

Leveraging technology such as automation, artificial intelligence (AI), Internet connectivity, big data, and the Internet of Things (IoT), smart cities can make real-time, data-informed decisions to improve the lives of its residents.

And there are a lot of them. More than half of the world’s population lives in cities. By 2050, that is expected to increase to 68 percent.

Most move to cities hoping for better job opportunities and quality of life. But, life in general—and this pandemic in particular—has proven that isn’t always the case.

Clearly, life in a city is not all it’s cracked up to be. How, then, can we utilize advances in technology to improve the way we live? Here are how smart cities around the world are already using technology and data to make life better for its citizens.

Mobility
Last July, Oslo’s environment agency announced that the city has registered more than 50,000 electric vehicles. The Norwegian capital is working to cut emissions by 36 percent by 2020 and as much as 95 percent by 2030. For years, citizens who opted for a zero-emissions vehicle have been exempt from sales, import, and road taxes.

(Also read: How Electric Vehicles Will Change the Future)

Thanks to Alibaba’s City Brain, Hangzhou dropped from fifth to 57th on the list of China’s most congested cities in 2019. City Brain collects data across the city from intersection video cameras and GPS tracking devices on cars and buses. According to CNN, the platform uses AI to analyze “the information in real time as it coordinates more than 1,000 road signals around the city with the aim of preventing or easing gridlock.”

In Singapore, the government aims to harness 1.5 gigawatt-peak (GWp) of solar energy by 2025. This will meet around two percent of Singapore’s total electricity needs.

(Also read: Four Reasons Why You Should Have a Solar-Powered Home)

Agriculture
In the city of Cauayan, Philippines, the Isabela State University has partnered with Singapore’s Temasek Polytechnic to develop an IoT-based aquaponics greenhouse.

“Projects like this give students exposure and encourage them to think outside the box, beyond what is normally taught in IT,” Mayor Bernard Faustino Dy told GovInsider.

Housing
With eighty percent of residents living in public housing, the Singapore government has partnered with private firms to assess smart home technologies such as home energy and water management systems. Faced with an aging population, the city-state is also testing monitoring systems for the elderly.

Community engagement
In London, the Mayor’s Civic Innovation Challenge is “an open call to the tech sector to develop new solutions to city problems with us,” according to Nick Swanson and Maria Geftar, Senior Policy Officers for technology at the Greater London Authority (GLA). Startups work together with corporations and public organizations to solve various urban issues.

Technology, insight, and participation: the three pillars of a smart city
According to McKinsey, smart cities can only work if they have these three critical elements:

Concerns about data privacy and human rights have left many citizens distrustful of digital technologies. All the technology and software in the world becomes pointless if there is no one to use them, making public trust vital to gaining support for smart cities. This can only be done through transparency and collaboration among those involved: local government agencies, private firms, and citizens.

Putting the needs of citizens at the heart of smart city technologies is crucial. “Smart city strategies start with people, not technology,” says McKinsey. “‘Smartness’ is not just installing digital interfaces in traditional infrastructure or streamlining city operations. It is about using technology and data purposefully to make better decisions and deliver a better quality of life.”

A long-term, people-centered vision is required to realize a technologically-connected and integrated future—one that nurtures, sustains, and improves livability for all residents as they make their way in the post-pandemic world.